From Tragedy to Triumph

“I have two children and have never once held them while sober. Today, I am a new man in Christ. I can’t wait to hold my kids and tell them I love them. I can’t wait for them to see me smile and hear me talk and read to them with teeth. I’m grateful for a new beginning.”

At 42, William has experienced more tragedy than most people do in a lifetime. Born and raised in Pittsburgh, William’s mom was a coal miner, and his dad left when he was five. He was abused and rebelled drinking and dating older women. “My mom beat me for dipping. I refused to cry. She wouldn’t take me to school, so I walked two hours to get to school. When they saw my bruises, the state took me away from her and placed me with my biological father. I didn’t know him and hadn’t seen him in years.”
“My father was an alcoholic,” says William. “He was married and had a new family. I had to move schools and struggled to fit in. I spent four months in a juvenile detention facility. It was either that or be put up for adoption.” William quit school in the 10th grade. And by the age of 19, he had been married and divorced.
Eventually remarrying, he was married to his second wife for sixteen years. All the while he continued to drink, was unfaithful, and got hooked on prescription pills. “I can’t blame her for divorcing me,” says William. “I wasn’t a good husband.” 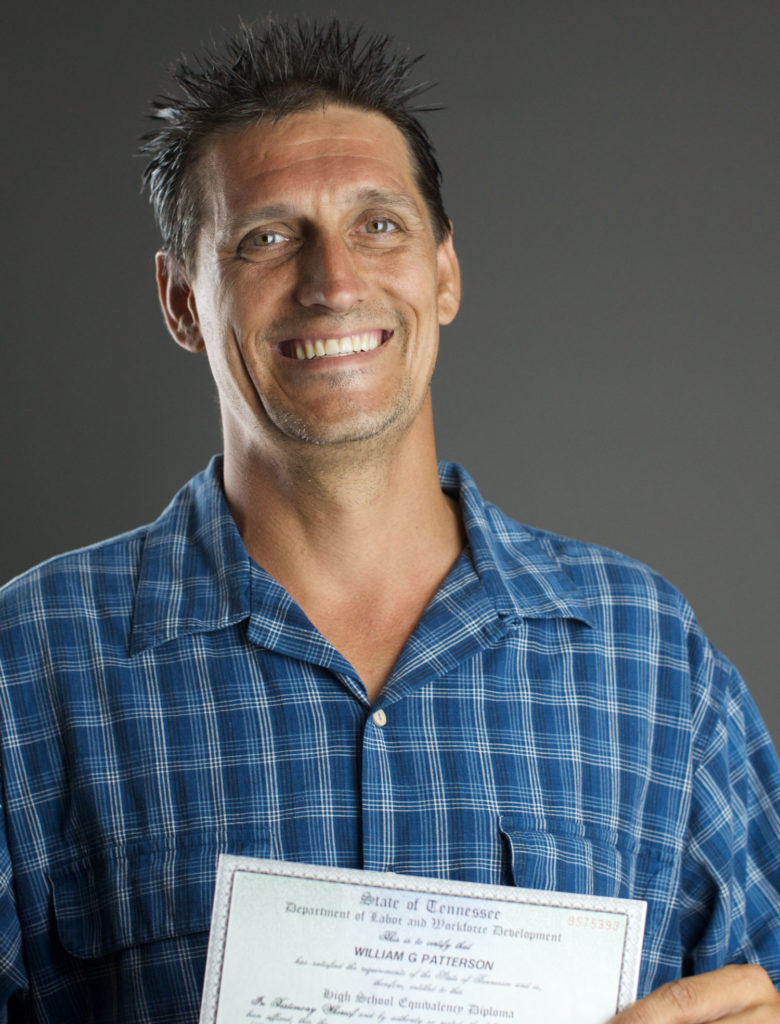 In 2007, William met Laurie, a school teacher, and fell in love. “We met online and after a long-distance relationship, I moved to North Carolina to be with her. We married in 2008. We both enjoyed drinking, but she had no idea I was an alcoholic. At first I did a good job of hiding it from her. When we found out she was pregnant with Dakota, she immediately stopped drinking. I, on the other hand, did not.”
Following knee surgery, William found himself again abusing prescription drugs. “Things went downhill,” shares William. “I was using drugs around my kid. I got fired. I couldn’t find another job. My wife was pregnant with our second child, Jayden, and I was still lying to her. I went through a 90-day program, but three months later, I was using again.”
Still trying to find a way to make things work, William landed a job as a truck driver. “Three months in, I was a co-driver, when the lead driver got pulled over. I wasn’t driving, but I was drunk. Once the police contacted my employer, I was fired on the spot and stranded in the middle of Nebraska with only fifty dollars.”
Afraid to call his wife, William started walking. He walked over 100 miles before coming to a bus station in Des Moines, Iowa. “The ticket agent told me I didn’t have enough money to get to North Carolina, but I could get to Atlanta or Nashville. I chose Nashville.” While in route, William heard about the Traveler’s Aid program at Nashville Rescue Mission.
“It was 10:30 p.m. when I got there and the doors were closed,” says William. “They gave me a bed, but I was stuck there for the night. Turns out it was a blessing in disguise.” The next morning, William met with Peter, a case manager at the Mission, hoping to get a bus ticket home. “Peter asked me if I had a drug and alcohol problem. Boy did I ever. I had lost several jobs, my family, and my dignity. Peter then told me about the Mission’s Life Recovery Program. I didn’t have to think too hard to know I needed help, and it was right there in front of me for the taking.”
That day, William laid down his cigarettes and gave away everything he owned, including the last few dollars he had and committed to starting a new life. “When I arrived at the Mission, I was hopeless and scared. Today, I am redeemed. My sins have been forgiven. There are no words to express the deep gratitude I have to Nashville Rescue Mission, staff, volunteers, and those who faithfully give. You have given me a reason to smile.”
William waited two weeks before trying to contact his wife. “At first, she wouldn’t talk to me,” says William. “I don’t blame her. I wasn’t a good husband or father to our kids. She was filing for divorce, but after a couple of months, we started talking and instead of getting divorced, we’re planning to date, and start a new beginning.”
While at the Mission, William started attending First Baptist Nashville, where he was baptized in March. “I am so blessed. I’ve found joy in Jesus! I have a great church home where I met Ms. Carol–a complete stranger, and she’s sent me a card almost every week filled with words of encouragement.”
William’s tragedies started turning into triumphs and for the first time in a long time, he had hope. “After trying seven times to get my high school diploma, I finally passed!” exclaims William. “I couldn’t have done it without the help of faithful volunteers like Jim Shackleford, Jim Coonce, and Shane Ryan, the Mission’s education assistant. “These men invested their time in me. Their faith in me gave me confidence in myself.”
“I’m blown away by the kindness and care complete strangers show me and other men in the program,” says William. “They never expect anything in return. It’s humbling. When I arrived at the Mission, I had four teeth. Today, I have a complete set of dentures and can’t stop smiling. It’s the first time in a long time I can smile–and today, I actually have something to smile about.”
“Before, it was always about me,” says William. “I was hopeless. Today, I want to share the joy I now know with others. I’m thankful for those who give, because your gift gives me hope. I’m looking forward to the future, and because of you, I have a future. Thank you.”

Josh Wilson's "That Was Then. This is Now"

“Today represents something beautiful,” Josh said, looking at the first row of the audience, a row […]

“Although I grew up going to church, I didn’t know God,” said Brandy. “Nashville Rescue Mission’s […]