A DIFFERENT MEANING OF FAMILY

Kevin’s life on the street led him right to our door. He pulled into the parking lot intending to sleep safely in his car—but instead, he came inside to find true safety and freedom from his past, thanks to friends like you!

“I’m from Tennessee,” Kevin says proudly, but his smile fades as he adds, “my childhood was rough.”

“My mother divorced my father when I was 3 and got custody of my sister and me. But she was more worried about how she was going to get high than she was about raising her own kids,” he says, his helplessness still vivid.

“I remember my mom would lock me and my sister in the back of the house where the hallway led to the bathroom—and lock the door to the kitchen. So, at night, if she just decided not to come home and we hadn’t eaten . . .” he remembers.

“Once, my sister crawled out the window to get in the house and cook me something,” Kevin recalls, and he can still picture the meal because every meal matters when you’re always hungry. “Noodles, but also some carrots—baby carrots, just boiled with butter.”

Yet hunger became an even bigger part of Kevin’s life as he grew older, filling the emptiness with drugs prescribed by doctors who first diagnosed him with ADHD, then deeper mental illness.

“They told me I had all these disorders,” he says. “And they gave me a quick fix—I guess to make me feel calm. I remember taking eight different medications.” Addiction followed fast, and not just to prescriptions . . .

“I was suffering from drug abuse,” he says. Until one night, sitting alone in a trailer, in despair, he began considering suicide. “I was sick of feeling how I felt: I hated what I’d become.” And that’s when he found himself praying, “God, remove everybody and everything out of my life . . .

“I felt like there were no good people left in the world—and then I came here” to Nashville Rescue Mission.

Like so many others during these difficult days, “I got evicted, and the only thing I had left was my car. So I came and just parked in the parking lot, thinking, ‘I can live in the car. I’ll be all right. I’ll be safer here.’”

Because “growing up, I’d always heard of the Mission in Nashville. So, I guess I just felt led by the Lord: it’s nothing short of a miracle that I’m sitting here talking to you!”

After being welcomed inside for a meal and a safe place to sleep off the street, Kevin began recognizing how Hope Lives Here: in the gratitude of our guests, in the hardworking staff—and in the time and talent shared by friends like you.

“I could see, just being here, there were good people left in the world. I’m from Tennessee: The Volunteer State!”

As Kevin also began giving back by helping around the Mission, a caring case manager saw “something in me I couldn’t see in myself, and they told me about the Men’s Life Recovery Program. 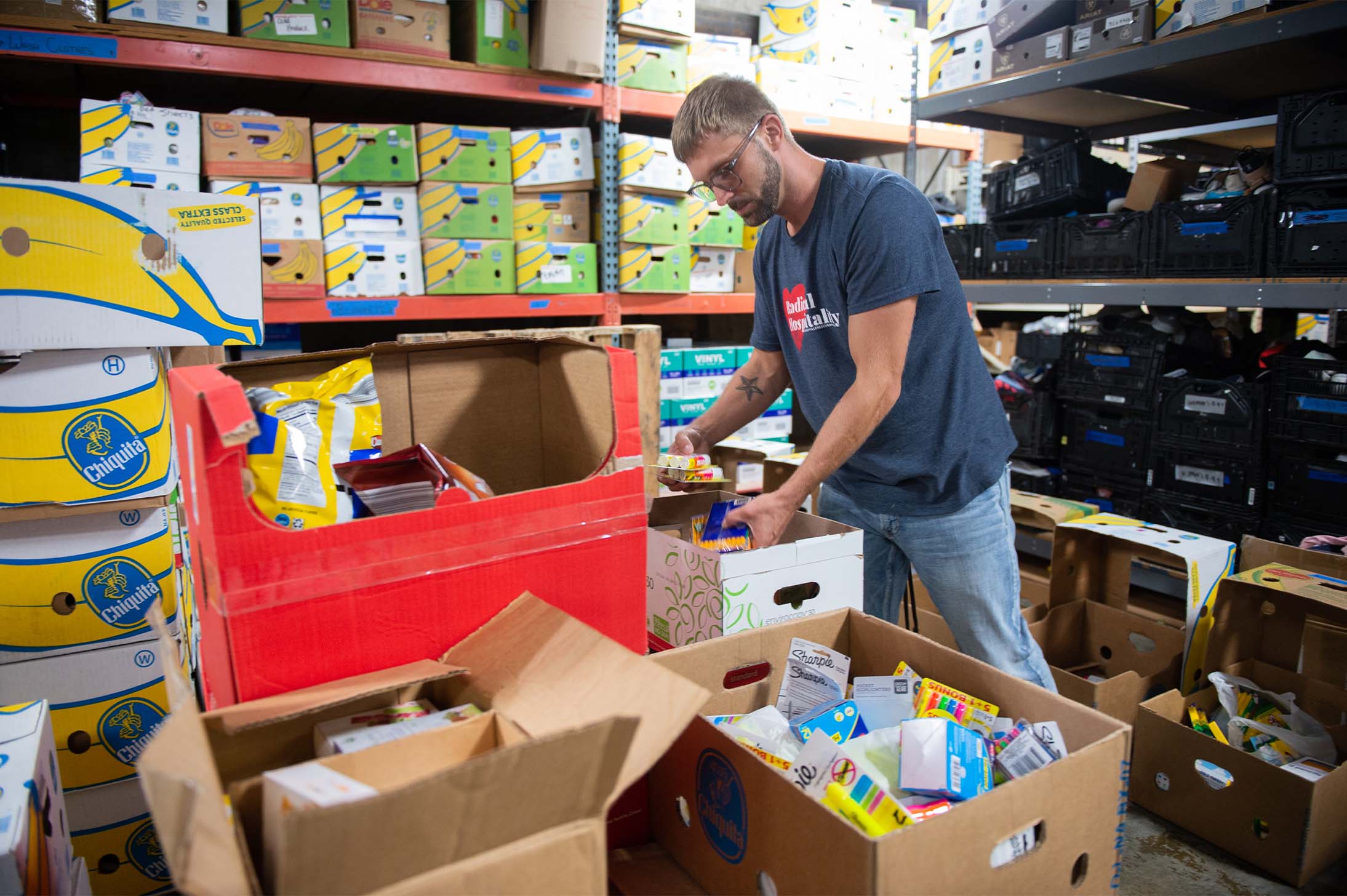 Now a graduate, Kevin walks boldly and freely in a life that’s been transformed, and he shares his thanks with friends like you who “gave me a chance nobody else had before.”

“I’ve had a family—a kind of family,” he says. “But coming here, it’s a totally different sense of family. Because it can be someone who’s sitting right there, somebody you don’t even know, but there’s a mutual understanding that you respect them, they respect you, and they are your brother or your sister in Christ. It’s brought a whole different meaning to family!” says Kevin, smiling.

“For the first time in my life, I feel like I fit somewhere, and that’s a great feeling because I went for 37 years lost, not knowing where my place was. Now, I feel like I have a purpose in life—a sense of belonging.

Kevin has also joined us on staff. “I work as the warehouse coordinator and basically make sure we don’t have any food shortages,” which is especially crucial at this time of year, as God brings so many men, women, and children here for radical hospitality.

Yet, confident in the generosity of his new family of friends, Kevin says, “I believe I’m ready for the next season!”

As we look ahead to the holidays, Kevin shares his thanks with you. “I feel like that prayer I prayed when I was in that trailer—just asking to die—actually put people around me who loved me, wanted to see me do good: God has definitely given me all of that.”

That’s because support like yours ensures that, together, we can reach every hurting heart, just like Kevin’s once was, as God leads them here for help and hope—on Thanksgiving Day and every day. Thank you and may God bless you for the difference you make! 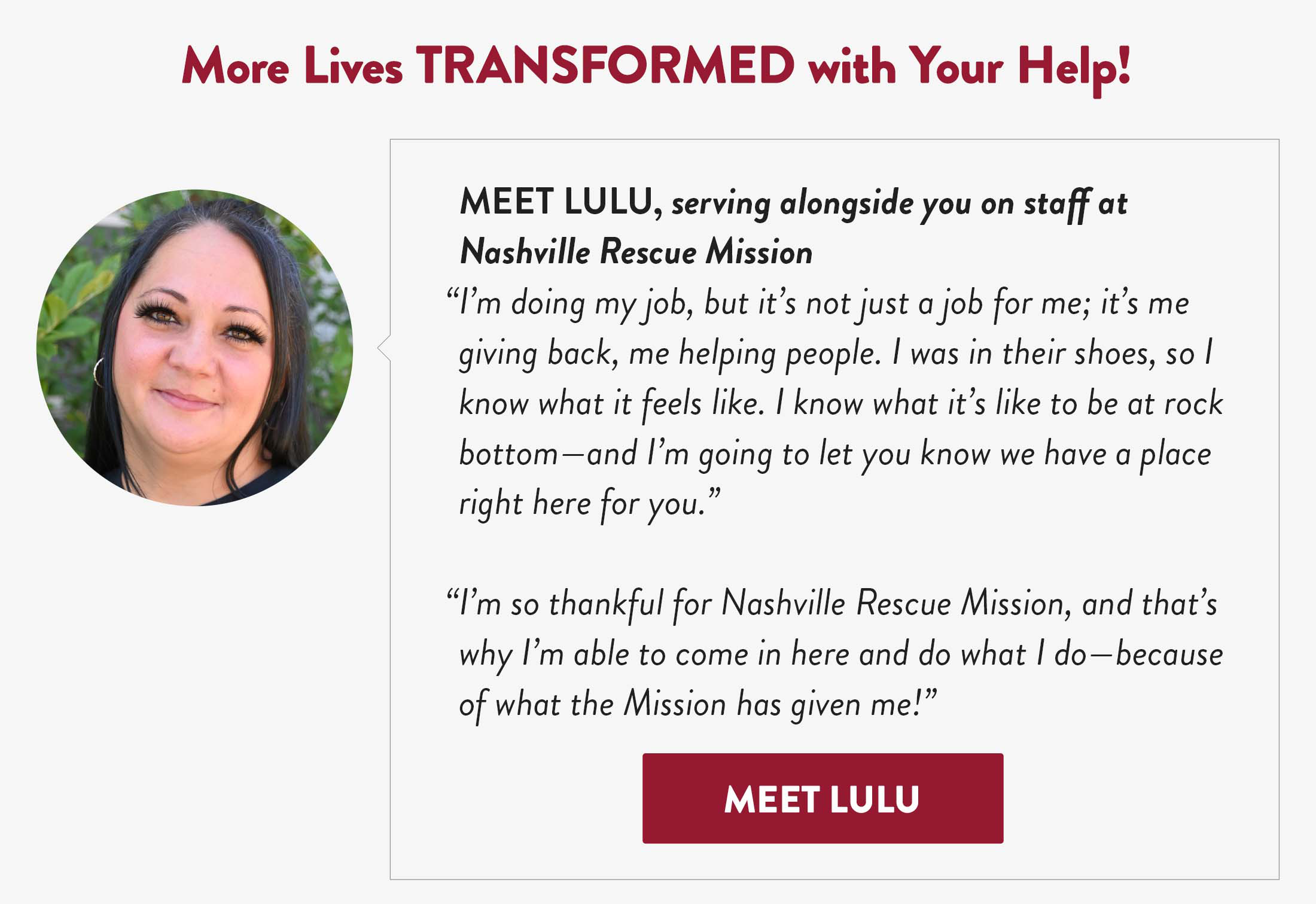 A Heart Restored: Finding Brotherhood While Rebuilding a Family

Ryan was born in Savannah, Tennessee as the youngest of four brothers. His days were busy […]

SHARING HOPE with Those Thankful for YOU!

Kyle knows and loves Nashville. “I grew up around the Hermitage area,” he says with […]