A Heart Restored: Finding Brotherhood While Rebuilding a Family

Ryan was born in Savannah, Tennessee as the youngest of four brothers. His days were busy with high school baseball, friends, and family. Raised by his grandparents, Ryan describes having a wonderful childhood full of love and support. He went on to graduate from the University of North Alabama with honors, but not before being introduced to his first pill. Ryan says this first pill—which would tragically spiral into a twenty-year addiction – is where his testimony truly begins.

FROM A BRIGHT FUTURE TO A SHORTFALL

After his college graduation in 2005, Ryan moved home to Tennessee to become a partner in his grandfather’s tire business. Together they worked side-by-side for ten successful years. After his grandfather passed, Ryan ran the business solo for a few years, but describes that by this point, his pill addiction grew into a costly methamphetamine addiction. Ultimately, Ryan lost his small business and his once shining future grew to be filled with loss. He illustrates that his addiction caused him to isolate himself into a single room for a couple of years, losing both his material goods and his psychological well-being. “I’d lost a house, a marriage, vehicles, a small business, my family’s trust—all to the cost of methamphetamine. [It also] took a lot of my personality away. When I was in high school, I was a class clown – laughed and talked. I had a big time, but once I got hooked on drugs and was [forced to rediscover who I was], it was very hard to talk to people because I’ve been under the influence all those years.”

Ryan describes a 2-week stint in jail as “the best thing that ever happened to him.” After his release, his grandmother wouldn’t allow him to return home. He believes she had no choice and that her boundaries pushed him to stay serious about sobriety. Ryan recalls that someone in the family knew about Nashville Rescue Mission and it wasn’t long before his eldest brother dropped him off.

“I didn’t know what the Mission or the Life Recovery Program was really all about. I was doing this for my family because I had nothing else. Nothing else was available to me. I had no family to go to, so this was my only option… But little did I know how the Lord was going to work through the Mission to save my life.”

“The first 30 days in the Program were very scary for me because methamphetamine worked to isolate me. Meth was the only relationship I had left. I found it very difficult to talk to people when I first came in.” But even when it was hardest, his motivation for staying in the program was his son and his family: “I wasn’t going to let Jacob be fatherless. I was given an opportunity to get clean and I was going to take it. I’d had enough.” Ryan’s commitment to the structure of the Recovery Program helped him rebuild towards these goals. He notes that while he found it difficult, “the rules and the structure were exactly what I needed. For a few years, I lived my life the way I wanted to with no rules. I found the structure to be the key factor in me getting my life back.”

A NEWFOUND FAMILY HELPS WITH HEALING

Within no time, Ryan was creating a new relationship with himself, with God, and with new friends. He says, “God knew that I needed healing for the big hole in my heart for what I’d done to my family. So, He gave me a temporary family here at the Mission. I met Chris Statts and Monte Thomas and several other friends. I believe with all my heart God gave me a Mission family until my family could forgive me. The Lord gave me my brothers here to heal my broken heart while my blood family relearned to trust me. Eventually, enough time and sobriety has helped to earn it back. They can see the difference and have been able to forgive me.” Ryan says that seeing his family at his July 2019 graduation – especially his grandmother and his brother Daniel — meant more to him than he could explain. He smiles, “And now I’ve got four years clean.”

ON THE UP AND UP

After twenty-two months in transitional housing, Ryan is proud to share that he now rents his own home with fellow Program alum, Chris Statts. The last four years have clarified for Ryan that “what matters most in this world is your children and your family.” He says he is most proud of not only how far he has come since starting the program, but how much growth there’s been in his relationships with his family. Ryan lights up when he shares that he has been able to spend time with his son, Jacob, when he visits his hometown. The accountability and stability he’s found in Nashville, he reflects, helps make this heartening progress possible. 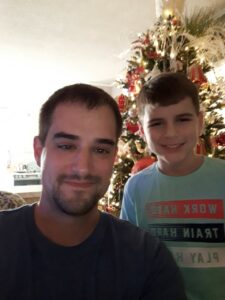 GOD’S PLANS: THE FUTURE HE RELISHES

In early 2020, Ryan accepted a job at the Mission and has worked in several roles since then. But he is clear about what’s to come for him: “The reason that the Lord brought me to the Mission was to get me [the guidance needed to] maintain my sobriety, so I could take care of my disabled brother, Daniel. I think that is going to be God’s ultimate plan for me in this life.” Ryan smiles whenever he talks about being a rock for his family and providing a future for his son. It is clear he can imagine no greater role for himself in this life. “God made it abundantly clear none of this was getting done without a little hard work on my part,” Ryan states. It is this work Ryan relishes in most as it is the work that has brought him back to God, to himself, and to his family.

“The things that I had held most dear to my heart and had lost have been restored in the time that I’ve been here from 2018 until 2022—all of it has been restored.”

Restoration for men like Ryan are made possible by Mission supporters. You can help others like Ryan today.

A Battle of the Mind

After a stay of 524 days, Richard walked out of Nashville Rescue Mission, arm-in-arm, with his […]

A DIFFERENT MEANING OF FAMILY