Because you gave, Patricia has hope

This year, Patricia will celebrate Mother’s Day, as well as her 29th birthday at the Hope Center with her 5-year-old son Brent.

In 2003, Patricia found herself divorced, with two young sons and a baby on the way while also addicted to drugs and alcohol.

“Addiction makes you stupid,” states Patricia. “I increased my drug use in hopes of miscarrying. And when that didn’t work, I made an appointment to have an abortion.”

“I knew deep down inside, abortion was wrong, but I didn’t know what to do,” shares Patricia. “The morning of the appointment, I got on my knees and begged God for a sign. I got chills and ended up throwing up for the next 5 hours. I was so sick I couldn’t go to the appointment. It was the sign I was looking for.”

A Perfect Child is Born

In February of 2004, Patricia gave birth to a perfect baby boy, Brent. “Despite the drugs and alcohol I abused during the early months of my pregnancy I gave birth to a happy and healthy baby.”

Patricia had several months of sobriety under her belt when in April, she was involved in a terrible car accident. “My friend was driving when we hit a deer. It came straight through the windshield, hitting me in the face.”
Patricia woke up in the hospital, her face so swollen it was unrecognizable. She was prescribed painkillers in order to manage the unbearable pain. This re-ignited her addiction and she found herself hooked. Eventually, Patricia managed to kick this addiction, but still continued to smoke marijuana.

Trying to Start Over

In 2007, Patricia enrolled in college. “I was determined to make something of myself,” proclaims Patricia. “I wanted to be a good mom. I wanted to provide for my kids and myself.”

“I was still using marijuana. I convinced myself it wasn’t as bad as pills or other drugs. I realize now, it served as a gateway for other substances,” explains Patricia. “I made friends with someone at school who introduced me to meth,” she says. “I got addicted almost immediately. When I couldn’t find meth, I bought coke and when I couldn’t find that, I bought crack. It didn’t take long for my addiction to take over my life.”

“I was chasing my next buzz, but all the while wishing I’d die in the process,” says Patricia. But when the Department of Children’s Services showed up to investigate her, it was enough to start Patricia down the right path.

“I knew I needed help. I also wanted to go somewhere, where I could bring my son. A friend told me about the Hope Center. It sounded perfect for me,” shares Patricia. “On December 1, 2008, my mom brought me to the Nashville Rescue Mission. I came here thinking God had broken me off. During a Christmas program at the Mission, I had an encounter with God. I knew right then and there, God had not abandoned me. He was with me. Two days later I re-dedicated my life to Christ.”

I Am Worth It

“Now I see I am worth it!” exclaims Patricia. “I am learning how to spend time with God. I’ve learned God is wonderful and loving. I’ve received forgiveness. I have faith. This isn’t rehab—this truly is life-recovery!”

“Once I graduate I plan to go back to school,” says Patricia. “I would like to become a counselor. I have lots of dreams. I love to sing for God. I want to travel. I’d like to go on mission trips. I’ve never been ice-skating, I’d like to give that a try, too.”

Because you gave, Patricia now has hope for a future.

Have you ever been so cold your fingers started to burn? Perhaps you 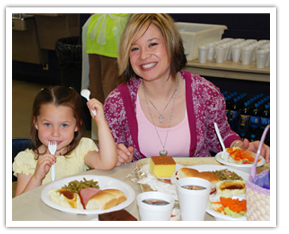 Easter – Hope for Those in Despair

For many, Easter is a holiday when people think of spring, the Easter bunny and egg hunts…